Trash Collection in the City of Chicago

By Claire Redden and Veronica Stanoulov 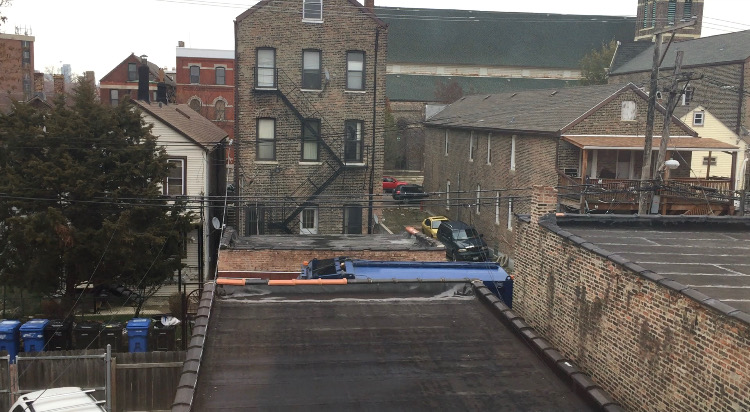 Sanitation truck going through streets of Pilsen (only occurs once every three weeks). Photo by Claire Redden.

To live and work in a neighborhood littered with trash is an everyday reality for thousands of residents in the many Chicago neighborhoods.

Litter has impacts on individuals and cities as a whole. Poor sanitation makes areas seem run down and poorly maintained. Ultimately, the high levels of litter reinforce feelings of not being responsible for public spaces, such as streets and parks, which affect the overall city.

“The negative impact of chronic littering on the character of our City neighborhoods is tremendous, and the changes put forth in this amended ordinance send a powerful message that we will not tolerate this completely unnecessary and careless act,” Mayor Rahm Emanuel said in a statement in 2013 when discussing litter laws.

The City of Chicago Council introduced new littering laws in 2013 that quadrupled the minimum fine for littering from $50 to $200, and increased the maximum tenfold from $150 to $1,500. Littering has become a problem in the city’s lower income neighborhoods.

Unfortunately, the fine hike has not been effective in deterring littering due to the lack of reinforcement. Illinois state police say there have been very few citations that have been written by for the sole reason that they must see an offense being performed in order to ticket someone for it.

As of 2016, the city of Chicago had implemented a waste removal fee of $9.50. Despite the $54.4 million revenue generated, it is not sufficient in covering the full cost of garbage removal according to the Civic Federation. The budget estimates for FY2018 and FY2019 continued to project the garbage fee would generate $61.2 million both years.

“Chicago Trash” Google Trends search over the past five years.

While there isn’t immediate change in costs and services provided, sanitation and trash collection is an area the city is focusing on reforming. With increased costs of sanitation, better services will be provided. However, these increased costs have hidden consequences for the unity of the city.

With the separate districts, there are different resources and funding available depending on the district. Generally, in predominantly white ethnicity areas, the cost of living is higher. Resources, such as sanitation, public safety, etc. are considered better in areas with more funding available.

“The majority of people are white and wealthy in Lincoln Park. You often don’t see homeless or different races inhabit the area… Lincoln Park is very clean and has a good system in place for trash collection,” Velasquez said. Streets of Lincoln Park free of trash. Photo by David Pilsen via flickr.

According to a survey performed by The New York Times and the Kaiser Family Foundation (2016), when analyzing the differences in life styles for different ethnic groups, the majority of results were complete opposites depending on the race and where the individual resided.

There are notably different perceptions on city services, such as trash collection, noted in this survey conducted by the Washington Post.

“White and blacks in Chicago are living in two totally different cities,” said Emily Badger when analyzing the differences in opinions of blacks vs. whites in the city of Chicago in a story for the New York Times. Race and ethnicity play a role in city sanitation since more funding is available in certain areas. In poorer areas where funding is not available, there is a direct correlation of crime, use for public spaces/recreational use, schooling, etc.

While getting first-hand experience by walking down 18th Street, Pilsen’s commercial center had very few trash cans for individuals to dispose of their waste. This gives visitors and residents little reason to properly throw out their scraps in designated areas. Thus, leaving the neighborhood’s main street dusted with candy wrappers, chip bags, and plastic bottles. 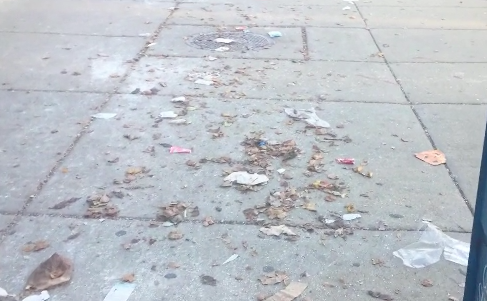 Samantha Cunliffe, a Pilsen resident, said that, “Sometimes [trash collectors] don’t come for weeks and our trash overflows. When that happens, bags get left next to the cans and things get blown away.”  Below is a map of the trash cans on 18th street:

According the City of Chicago, people litter for four reasons:

According to Statistical Atlas, the data on Lincoln Park shows that it is primarily an ethnically white neighborhood. Trash collection is generally high due to higher quality expectations of living standards and more funds being available through higher cost of living.

When it comes to recycling, Chicago programs have little to no organization. Individuals that live in residential buildings are instructed to leave their recyclables in a blue cart by their trash to be picked up every week. However, in lower-income neighborhoods, such as Pilsen, the pickup schedule has been slowed to once every three weeks.

When asked about recycling, Cunliffe mentioned that “…the recycling bins in my alley are almost always full.” 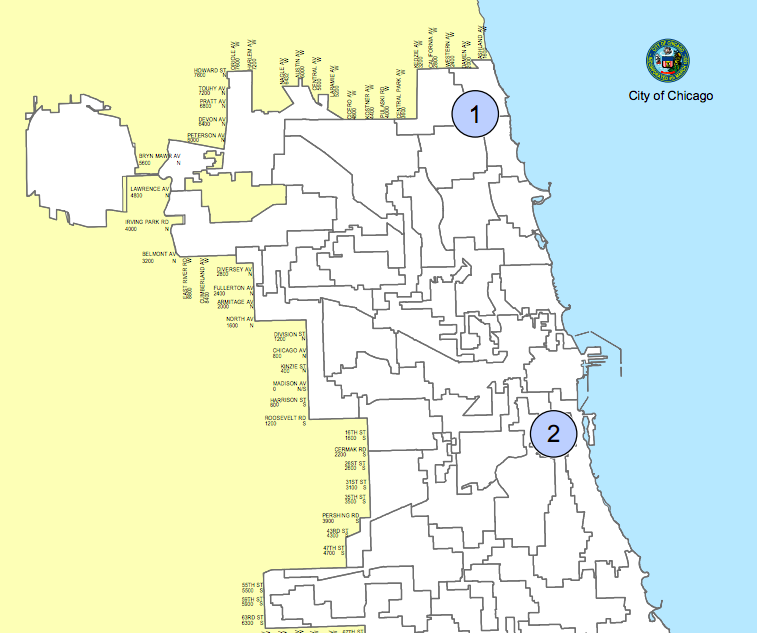 Paul Jones, a four-year employee for a sanitation department, said his job has changed over the years. Paul told us that, “When I was originally hired, the company was called Earth First until it was bought out by Advanced Disposal. So it basically went from an LLC to a corporation. It affected me because I primarily do commercial recycle.”

According to Jones, he and his coworkers work up to 15 hours a day to keep the city trash free. Jones quotes, “We wake up at 3 a.m., and work until 3 p.m., The purpose is to get most work done before morning commuters get up and to continue the work until 3 p.m.. before the 9 to 5 workers get off their shift.”

Despite all these discrepancies and difficulties to keep the streets clean, Pilsen residents have made efforts to clean up their streets. In fact, the city of Pilsen was recently named one of the “Coolest Neighborhoods in the World” by Forbes Magazine due to its rich history that individuals have the desire to protect.

Locals at the Pilsen Community Market, as well as The Greater Pilsen Economic Development Association (GPEDA), organize litter cleanups in the Fall to clean the streets before the snow begins. Pilsen serves as an example of an area whose residents have, throughout history, stood through the struggles of bringing up the neighborhood. 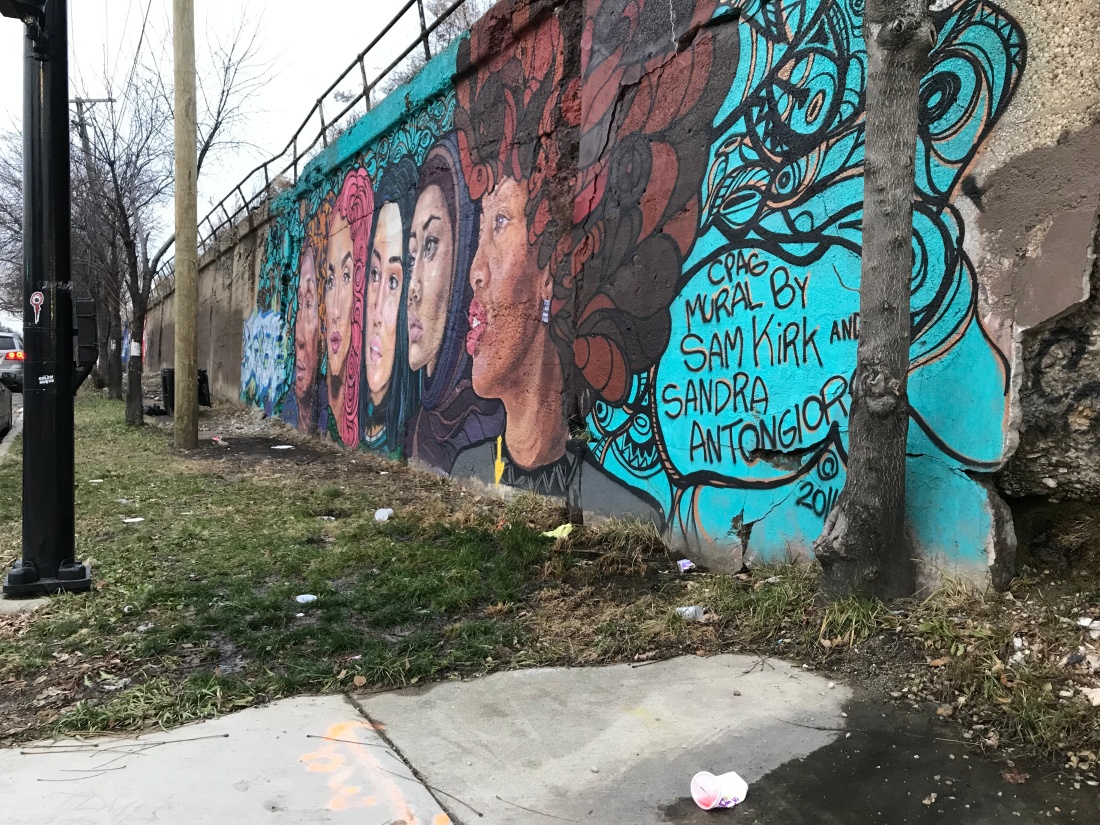 Tips from the GPEDA to help keep areas like Pilsen clean:

It’s officially October, which means “spooky season” is upon us. That’s right, it is now socially acceptable to break out the Holloween decorations and getting your costumes together. Along with the pumpkin picking, hay rides, pumpkin spice lattes (…or everything), and the bulk amounts of candy on sale there are endless amounts of opportunities to get your pants scared off. The Midwest has become known for having the best-haunted experiences in the country, and Chicago is in the center of it all.

This map provides you with a directory of some of the best haunted houses in the Chicago land area. From scares in 13 story tall buildings to old abandoned prisons, you’re guaranteed to have a spooky time this Holloween season. Take a look at this map to determine which haunted house is worth a visit this month if you so dare. If you’re anything like me I’d recommend bringing a friend you can hide behind and/or laugh with (or at). I wish you all a Happy Holloween, and an even happier scaring!

Hurricane Florence Trends Down in Light of Emmys

In general, we all look forward to the Emmy Award Ceremony, and by that, I mean watching it from our TVs. However, since most of us work we don’t have time to tune in and see the fabulous outfits the stars wear on the red carpet. Normally we’d see a surge of Google image searches regarding the event, and that didn’t change this year. Even with the national disaster known as Hurricane Florence occurring right here in our own East Coast, Americans seem to be just as concerned about the ceremony as they are in the storm.

What do these trends say about our current climate in the U.S.? Do you think these trends are a coincidence or could there be an underlying variable? 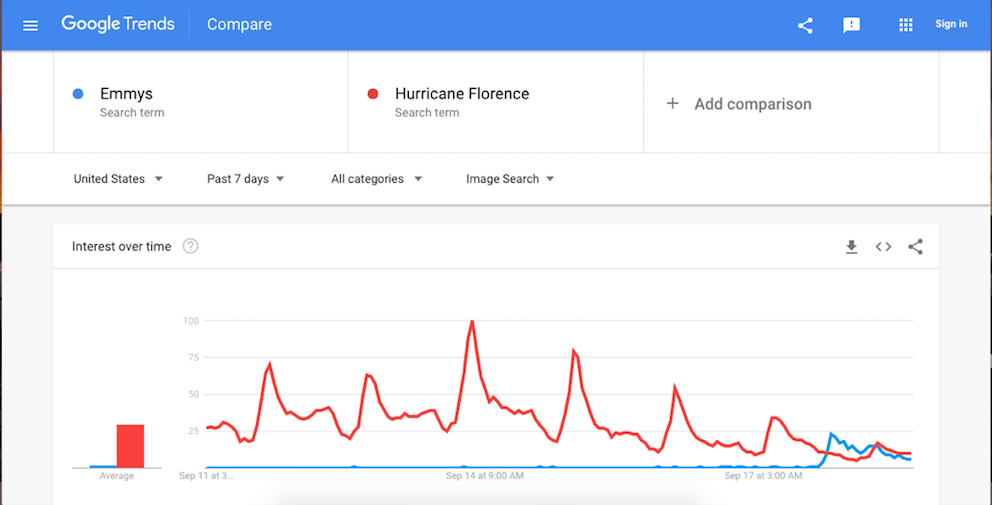 With Apple’s release of the new iPhone XS and iPhone XS Max over the weekend, it’s not a surprise to see Americans Google searching it like crazy. As usual, Apple fanatics are dying to get their hands on it. A simple search on Google will bring up articles reviewing the new phones, direct sites for purchase as well as videos of lucky customers unboxing the new phones. The chart below displays trends in YouTube searches for the iPhone XS and XS Max.

YouTube searches reached their peak last week on September 12th for the iPhone XS and the 14th for the XS Max. Although these are the exact same phones in different sizes, we can see that there is more interest in the smaller version (iPhone XS) than the XS Max. Searches for the two phones have followed almost identical trends and have seemed to go down in interest as the days from the release get further away.

Do you think these phones will live up to their anticipation? So far, as search trends are decreasing, it doesn’t look too promising. 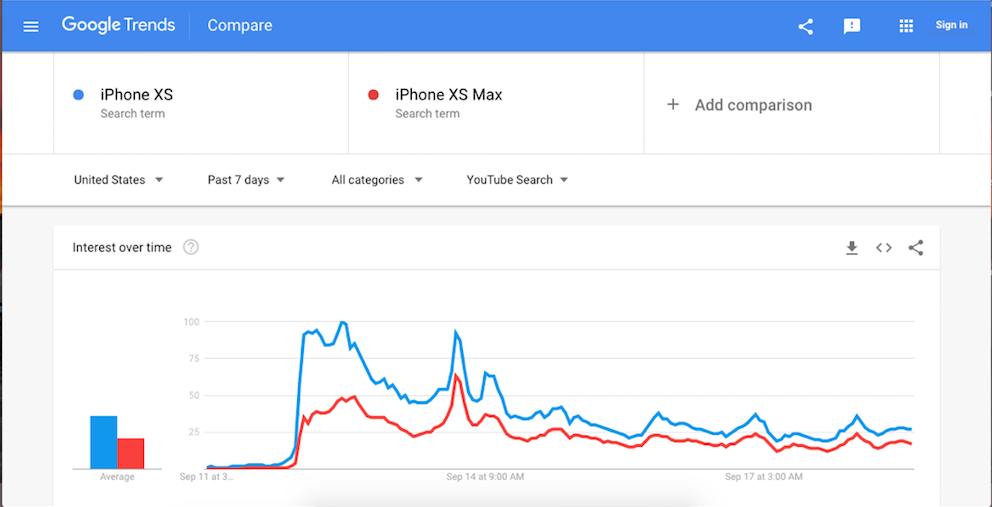 END_OF_DOCUMENT_TOKEN_TO_BE_REPLACED

Welcome to my Digital Journalism site!

My Tweets
Create your website at WordPress.com
Get started